2018 TPM Takeaways – The Certainty of Uncertainty 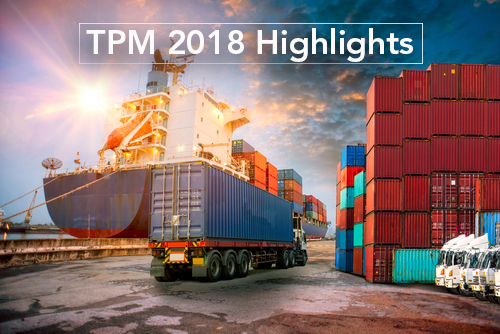 The Trans-Pacific Maritime (TPM) Conference is an annual gathering of supply chain executives wherein industrywide successes and pain points are deliberated, with presentations and discussions typically leading to an overarching path of future resolve in an otherwise fickle trade. However, this year, aside from uniform predictions of relative ocean rate stability throughout 2018, the consensus amongst pundits seemed to be that the only certainty within the shipping, logistics and supply chain industry is uncertainty.

The tide of uncertainty that has swept across the bow of the supply chain industry is attributable to the following five factors, each of which were examined at length during the 2018 TPM Conference:

The overall tone of the conference in regard to blockchain was one of unrepressed optimism. The vast majority of speakers, moderators and presenters didn’t doubt the capability of blockchain, especially once API’s are linked to milestones within the ledger (a shared list of records that track achievements), but no one was certain how the industry should or could arrive in this transparent paradise.

Though a multitude of recent partnerships have formed in efforts to explore the feasibility of a blockchain driven supply chain, there is fear amidst the industry that these partnerships will only serve to further silo an already compartmentalized industry.  Collaboration, which ironically is argued to be one the founding principles of blockchain, is firmly on the backburner while the race to implement first takes precedence. If used primarily as a commercial differentiator, blockchain technology becomes commoditized, as opposed to a tool that could further unify a largely disbanded industry. It is still too early to speculate whether or not transnational government bodies may swoop in and provide a legal foundation for an industry-wide blockchain system that could truly unite all parties in the supply chain.

It is no secret that the implementation of electronic logging devices (ELD), decreased hours of service (HOS) requirements, a shrinking labor force, a severe chassis shortage, increasing container volumes and highly demanding consumers have created a crisis of epic proportions in the U.S. trucking market. Discussions surrounding these issues at TPM were bleak, with virtually all speakers concluding that things will continue to get worse before they get better. There is no proverbial magic cure that the industry can administer to this ailing patient and no real solutions are yet visible.

Rail options may provide relief for some shippers, but rail comes with its own set of headaches and still requires rather extensive trucking unless you are among the fortunate few who happen to reside adjacent to a rail yard. Though the future brings hopes and promises of autonomous trucking, blockchain technology and enhanced infrastructure, each of which could help shippers regain a stronger foothold in controlling domestic supply chain outcomes and costs, these solutions are still years in the making and cannot be counted on to resolve current issues in a timely fashion. Thus, the immediate future of U.S. trucking seems quite uncertain.

President Trump’s newly proposed tariff on steel and aluminum (more details available in our March 9th Shap Flash) could prove to be only the tip of the iceberg in his rather vaguely defined plans to reignite U.S. manufacturing.

Though proposed tariffs have yet to be passed into law, the potential of commodity specific trade battles with certain long-term U.S. trading partners is easily conceivable. Needless to say, the ramifications of any such clashes could act as a catalyst for an industry meltdown on a colossal scale. Yet again, we are thrust into the realm of uncertainty.

Vessel sharing agreements (VSA) and the formation of carrier alliances were enacted in a time of severe market volatility, and much of the contract language keeping carriers bound to their alliances is considered weak and full of loopholes. Hence, as we continue to ride a bull market, it is likely that certain carriers will break from their alliances in an effort to take full advantage of the potential profits while capturing market share.

In contrast to the above, allied carriers continue to place orders for new ships and mega vessels. Once a certain threshold of new vessels are introduced to the market there is the possibility that capacity on certain trade lanes could usurp demand, giving yet another valid reason for carriers to retain allegiances and VSA’s as a means of off-setting low market rates caused by extremely heightened capacity. Furthermore, even if demand meets or exceeds capacity, the extended introduction of larger vessels to the market will only cause greater strains on U.S. ports and domestic infrastructure.

It wasn’t long ago that West Coast labor negotiations impeded container traffic on a nationwide scale, causing innumerable headaches and financial losses across the industry. Though the ILWU negotiations are a story of the past, they do paint a picture for on-going ILA negotiations, especially as automation technologies begin to play a larger role in port operations.

TPM discussions revolved around the ability to implement longer-term, more balanced contracts as a means of overcoming future labor disputes.   All eyes are still on ILA negotiations for Gulf and East Coast ports.

Needless to say, the future of the supply chain industry is fraught with uncertainty. As newly coined “digital forwarders”, those that started in tech and expanded to supply chain, are now successfully competing with the titans of the 3PL industry for market share, it seems that our somewhat archaic industry has now entered the 21st century head-on and must manage the widespread ambiguity that always accompanies positive disruption and change. Overall, the future of the industry is immeasurably bright as we are primed to use technological and procedural advancements to create greater business sustainability and consistency.  But, before we can make it to the promised land, we must circumnavigate the tides of uncertainty.

P.S. – I wouldn’t be a salesman if I didn’t deliver a plug, so I want to leave you with the fact that Shapiro has been around since 1915 and made it through some of the toughest times in history unscathed. So, if you are feeling lost or less than confident in your current forwarder or broker, please reach out and ride the tide of uncertainty to inevitable success with us…..We Deliver. Problem Solved.