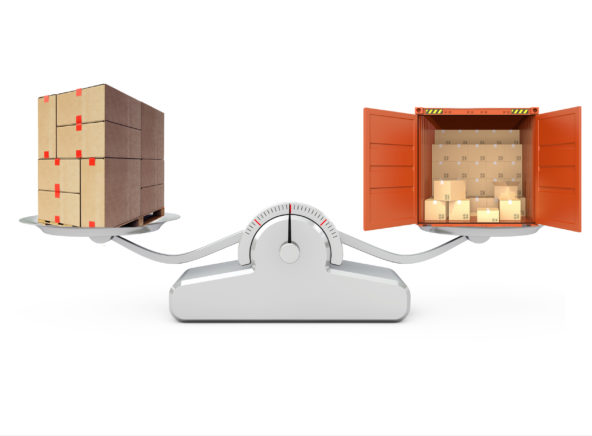 When 20’ and 40’ full containers make up 90% of all goods shipped around the world, a common question arises with newer shippers: “What if I don’t have enough freight to fill a full container?”

In this case, LCL (Less-than-Container-Load) may be right for you.

Don’t judge a shipper by their carton count

LCL offers shippers with regular smaller shipments the flexibility to move their orders when they’re ready rather than waiting for enough orders to make up a full container. A 20’ container’s cubic capacity is 33 CBM (although we always recommend customers avoid going beyond 27 CBM to allow for air space for unloading).That can be equivalent to 20 double-stacked pallets if built at the correct height.

With LCL you pay per cubic meter or per metric ton for space inside a consolidator’s container. Whether you’re charged by weight or volume is determined by the volumetric nature and density of the cargo. A crate of feathers will be charged on the size, whereas a pallet of safes would likely be charged on the weight.

Additionally with LCL, freight travels on a CFS (Container Freight Station) to CFS lane as opposed to Port/Rail to Port/Rail lane, giving you many more inland destination options. This can result in shorter, less costly inland moves than shipping FCL where you are restricted to major rail ramps.

Upon arrival at the destination CFS, the freight is unloaded from the container, segregated, and awaits pickup. The fact that the cargo is already out of the port gives LCL shippers an extra few days of free time and reduces the chances of accruing demurrage and detention charges.

Rules are meant to be broken

Rule of thumb: When the volume of your LCL shipment reaches about 15 cubic meters, it’s time to start considering a full container. The 15 CBM estimate marks the cutoff where, after the freight and handling charges are calculated, you’ve reached or exceeded the cost of a 20’ container in the same lane. If you’re a shipper trying to minimize the cost per unit to ship your goods, awareness of this cutoff point can be important to achieving economies of scale. Switching over to a 20’ container in the above example essentially gives you an additional 12-15 cubic meters of space for free.

However, there are situations where this rule doesn’t always hold true.

When a shipment requires warehousing, extra palletizing, or pallet reworking, the cost of devanning a full container can be greater than the destination CFS charges already included in your LCL quote. In these situations, it’s common to see LCL shipments in the low 20 CBM range end up cheaper than the same FCL move when considering all costs up to final door delivery.

Another rule to be broken applies to the freight market itself. FCL rates react very quickly to market changes, lowering rapidly when ships are not full and spiking when capacity gets tight. In contrast, LCL rates tend to be more stable. For example, a 20’ full container rate at the beginning of the month can decrease or increase by mid-month depending on what market forces are present at the time. The LCL per CBM rate will likely not be affected by the FCL’s price fluctuation, or if it is, it will take the consolidator time to apply the changes.

Thinking inside the box

Beyond cost, there are other factors that can affect whether LCL or FCL will be right for you or your shipment, such as how much you want your cargo touched, how much security you need, and how quickly it needs to arrive at its destination.

LCL cargo is physically handled on average 3-4 times more than the same shipment moving as a single FCL due to the fact that it needs to be consolidated at origin and deconsolidated at destination. Additional handling can sometimes result in damages, loss, and­—let’s face it—stolen cartons. If security and minimal handling are important, you may want to consider FCL even for a smaller shipment.  With an FCL move, the same shipment gets loaded into the container at the supplier’s door, sealed, and does not get opened again until it reaches the consignee’s door.

The origin and destination handling will also affect your transit time. You can always expect at least 5-8 additional days with an LCL shipment (sometimes more). Rather than going directly to the port in the container, LCL freight is dropped at the CFS where it waits in a 5-7 day window for the other freight it will be loaded with before making it to the port.  Once it gets to the destination, instead of being picked up from the port and directly delivered to your door, it must first make a stop at the CFS warehouse to be unloaded. If urgency is important, those extra days can make a difference.

Still scratching your head? It’s understandable. Contact a Shapiro representative to help find the perfect solution for you and your shipment.